As we know, Linux vs Windows are operating systems with different advantages. They also differ on grounds of user friendliness.
Both the OS can be compared on different basis. For instance, if we compare Windows & Linux on the basis of installation, Windows installations are a lot more simpler, though time consuming.
If we consider the movies softwares, a vast majority of programs are written primarily for Windows. Though many programs have versions that are compatible on Linux, at the same time, a lot of popular Windows softwares are not available on Linux. 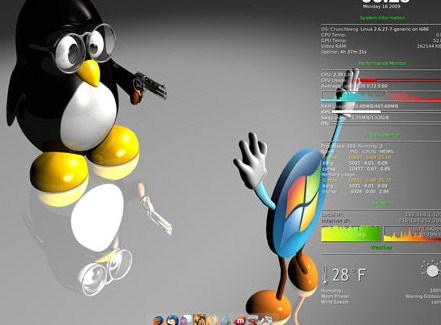 A big advantage that Windows have over Linux in the software is that virtually every program is designed keeping Window’s support in mind. Compatibility is not an issue to worry about in this OS. When it comes to Linux, security is one of the principle reasons for its popularity in the IT sector.

Unlike Windows, Linux secures its systems is through privileges. For example, Linux doesn’t grant full ‘root’ access to user accounts by default. Due to this, limited damage will be caused if a virus gets in.

When it comes to performance, again, Linux is much quicker & reliable on the whole. Linux computers & laptops, on an average outperform Windows over a longer period.

Linux doesn’t have the advantage of being the most widely used operating system in the world. This is primarily the reason when it comes to user friendliness & accessibility, Windows is a much preferred choice.

However, Linux is still better than Windows as a desktop OS.
Windows might be better in GUI, it may undoubtedly support all your favorite programs, but there’s nothing Windows does that Linux cannot do.

Apart from this, a Linux OS which is GPL-licenced allows one to modify a software which is not possible in Windows.
With Linux, you have a location which is centralized & you can search, add or remove any software. On the contrary, Windows has nothing like this.